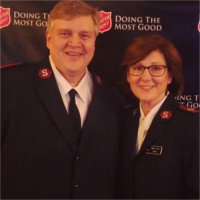 Majors Annette and John Lock served as Corps Officers for 25 years and moving to the Empire Division after serving two years at Northern New England Divisional Headquarters – Major John as the Divisional Secretary and Major Annette as the Secretary for Program and the Command Secretary for Social Justice. This new officer duo replaces Majors Steven and Valerie Lopes who have been appointed to a new assignment in The Salvation Army’s Greater New York Division.

The Locks were commissioned in 1992 to Toms River, New Jersey, where they served for seven years. They were transferred in 1999 to open the work of the Army in Flemington, NJ. After that, they served two 7-year appointments in New London and Waterbury, Connecticut from 2001 to 2015.

Majors Lock then returned to Portland, Maine, where both of them are from, and served as the Corps Officers there for two years.

The Locks are excited to follow God’s plan to Buffalo. “We are aware of the great legacy of service to the Greater Buffalo area and the impact this service has had on the community over many years,” says Major Lock. “It will be our privilege to come alongside the team of officers and dedicated employees at Buffalo Area Services to join in the work that is being done and to seek new ways of meeting the emerging needs of this area.”